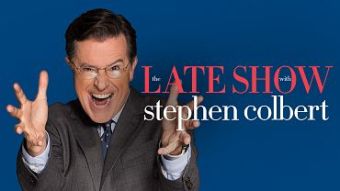 Stephen! Sorry. stephen. Love you, love you, loooooove you. Ever since your appearance at the White House Correspondents’ Dinner, you’ve been my hero. So when I saw that your show was in trouble, I knew I had to help in the only way I know: with my opinion. That and I’ll send you five bucks so you can get a cup of coffee.1

The pressure of stepping into the shoes of a legend like David Letterman must have been incredible, and so must be maintaining his legacy. Conan showed guts and integrity by stepping down from his dream job at the Tonight Show rather than changing that institution. But here’s the thing. Part of the reason for the dip in ratings is because you aren’t Dave, will never be Dave, and some fans will never fully accept anyone who isn’t Dave–but Dave isn’t coming back, so what’s the point in upholding the institution? I do believe the Late Show could be better, but not because you’re doing anything wrong. It isn’t about fixing things. It’s about throwing things out.

But first, let’s take a step back.

There are gajillion other talk shows on air, all following the same basic format that was created by Steve Allen in 1956 and perfected by Johnny Carson. Each attempts to differentiate itself, but a new coat of paint does not a unique experience make. We get the same jokes commenting on the same news and political gaffes; the same guests promoting the same products they’re promoting on every other show, with the same safe, approved topics and questions; the occasional weird character; then one song by a musical guest. Rinse and repeat.

It is a tired, old format. You have, in essence, gone from the shackles of playing a single unique character day after day to performing in a dungeon of convention. Which brings us to my first suggestion…

It’s time this talk show anachronism got staked through the heart (though you wouldn’t be the first to do so). You didn’t need one on The Report, and you don’t need one now. If you do decide to keep the monologue, do it just once a week (Fridays), or once every two weeks, or once a month. With more time, you and your staff can spin the material into something sharper, more special, and a better reflection of your humor.

Well, not entirely, but go with a “Less and more” approach–fewer guests with flexible interview lengths. You’ve already been booking interesting and provocative guests (and I’m not the only one who thinks so), so why not let the interview go until it reaches a natural conclusion? If it runs over, then put it on the internet in it’s entirety. Some topics simply can’t be adequately addressed within the usual time constraints. And when you enjoy yourself, we enjoy ourselves. When you’re fully engaged, we’re fully engaged2.

Also, when you conducted interviews as the character of Colbert, your guests were always off balance, so the exchanges were unpredictable and spontaneous (at least on their side). I think a more-open ended format would help bring much of this spontaneity back. Someone might be able to look intelligent repeating talking-points for five or ten minutes, but not much longer. You’ve proven yourself to be a master of giving people all the rope they need to hang themselves.3 But you’ve also shown that you can be firm and tenacious, while being fair and gentlemanly when handling the most serious and divisive of topics.4

The only way to win at nuclear (or zany character) brinksmanship is not through escalation, but by not playing.

I know. Some characters are outrageously funny, but outrage can only go so far.5 I’m not saying to never have a strange character, just make sure it’s relevant.6

I remember an episode of The Tonight Show where Chuck Berry took over the entire show, using up every other guest’s time (one of whom was Robin Williams). It was a spontaneous, magical bit of television. I’m not suggesting you try to replicate it, the entire lightning striking twice thing, but here’s what I do suggest:

Have the musical guest score the entire episode, or perform for a full week. Or you could have a month-long competition and the audience votes for the band that gets the full week. Established acts (or their record label) may not want to sign the sort of usage agreement necessary, but think of all the up and coming bands that would jump at this kind of exposure. For example, some extraordinary musical performances have been preserved and are available for future generations of fans because the artists who performed on the early seasons of SNL weren’t beholden to the draconian practices of the RIAA.

By that, I don’t mean doing the character you left with The Report… though you may have lost a few viewers in the transition. While I can only speak for myself, I think your true fans would agree that it wasn’t the character, but the content of your character that people love. Behind the dolt, we could see your intelligence, humility, kindness, and compassion. This is what we respond to, and this is why we watch.

You are at your best when dealing with the issues and topics that amuse or concern you. So do more and longer pre-filmed segments.  Something like how Top Gear cuts between film and studio segments. Stretch the films across multiple episodes and/or create ongoing series. Your films have made us laugh, educated and enlightened us, and made us care (Colbert Super Pac, Take Our Jobs, Better Know A District, Waffle House, etc.). I know I’m going to eat more waffles from now on. In addition to being very funny, you’ve spoken up to the intelligence of the audience and appealed to our humanity. When you do this, no one can touch you. Not your fellow talk show hosts, and certainly not the news.  I know your humility will make that hard to accept, but it’s absolutely true. You may need to take a few (or several) week hiatus in order to write and film an adequate backlog of segments, but I am positive that it would be a worthwhile investment.

Without the guests you’ll have more time to fill. One thing you could do is hire people to star and write their own segments. I know that that is more the Daily Show’s shtick than yours, but doing so could further help differentiate your show from the competition, and would give you some needed breathing room or the time to develop your own bits. No one wants you to burn out. Besides, having all those correspondents didn’t diminish Stewart’s prominence one bit. It just created a whole bunch7 of stars.

You have a great show, ratings notwithstanding. No amount of change can guarantee that they will go up given the competitive landscape, but deeds will not be less valiant because they are unpraised. By ditching the old, you could create a bold, new paradigm in television programming just as you did with The Report. It might take a while for people to catch up, would run contrary to conventional studio executive thinking, and would require a great deal of courage to fight for… but you’ve shown you have no shortage of that.

So give yourself The Bump, buddy. You deserve it.

1. Do you accept Bitcoin? And sorry, but the gratuity is on you. I don’t love you that much.

2. BTW, toward the end, Leno was number one even though he clearly wasn’t interested in half of his guests. How fun is it to watch that, really? All you have to do is watch how animated he is on his outstanding Jay Leno’s Garage to see the difference, but that show gets a tiny fraction of his previous numbers. And given shifting viewing habits, it’s only a matter of time before a whole new metric is devised. But like any good zombie, the old way of doing things is going to take a while to go away. All this to say, your ratings really don’t matter. Your show is good.

4. Your recent interview with O’Reilly was fantastic. I could have watched that for hours. Literally. But then I listen to Joe Rogan’s podcasts, so I supposed that must be taken with a grain of salt.

One thought on “To Stephen, With Love”